All of the "Pots" are 4 turn, except what I have marked as #3 inside the transmitter. Clockwise (CW) usually increases the value while CCW decreases the value.
The 4 turn means it requires 4 turns to go from electrical end to end. However the pots will spin forever, so turning the pot more than 4 turns has no affect. As soon as you turn the pot in the other direction, it will start to make the electrical change in that direction. You might want to think of a rack and pinion and maybe you can imagine a click - click at either end of the 4 turns.
PLEASE find a screwdriver that fits these pots - plastic is good.
Also, the labeling of the pots and switches under the name plate is on paper and can be easily damaged.

4 servo reversing switches are found under the name plate for the 4 main channels. Make sure the switch itself is all the way normal or reverse, do not leave any switch in a mid position. The normal/reverse may seem backwards from that of today's transmitters. If flying electric, the Kraft Throttle channel needs to be "reverse" for most ESC's.
The Landing Gear channel (Ch #7) may also be reversed.
Under the name plate are two adjustments for the Landing Gear "A" & "B", each pot is the same. The "A" pot is usually adjusted when the transmitters Landing Gear switch is pushed away from the pilot (down) and the "B" position is when the switch is toward the pilot. Adjust either pot for up/down and for the amount of travel.
Note; In the day, there were 180 degree proportional servos for landing gear. The landing gear adjustments on the Signature Series transmitter allowed you to over drive the landing gear servo so you did not need a special servo.
Be careful so you do not over drive and stall your servos.

Servo travel is adjustable on all channels. The pots turned CW will increase servo travel.
On channels, Elevator, Aileron and Throttle there are two pots under the name plate labeled "long" and "short". These two pots usually operate with a dual rate switch if installed.
Place the dual rate switch in the up or normal position and adjust the "long" pot to set the high rate.
Now place the dual rate switch in the down or low position and set the "short" pot for low rate.
If there is not a dual rate switch (such as throttle) the "long" and "short" pots can both be used as they are wired in series. The "long" pot will act like a fine adjust and the "short" pot will act as a course adjust.
The Rudder channel has one pot under the name plate to adjust overall servo travel.
The Aux channels 5 & 6 are the sliders normally found on either side of the transmitters on/off switch. Channel 5 is on the right. To adjust servo travel of the Aux channels, the back of the transmitter needs to be removed. Look at the picture above and locate the pots I have labeled 1 & 2 for ch 5 & 6. Turning these pots CW will increase servo travel.
The Landing Gear has 2 adjustments under the name plate labeled "A" & "B", each pot is the same. The "A" pot is usually adjusted when the transmitters Landing Gear switch is pushed away from the pilot (down) and the "B"position is when the switch is toward the pilot. Adjust either pot for up/down and for the amount of travel.
Note; In the day, there were 180 degree proportional servos for landing gear. The landing gear adjustments on the Signature Series transmitter allowed you to over drive the landing gear servo so you did not need a special servo.
Be careful so you do not over drive and stall your servos.

Note; The Signature Series transmitter is the only Kraft radio that has landing gear Ch #7 instead of # 5.
Note; Replace the transmitters back noting top/bottom. The tabs are toward the bottom.

Under the name plate there are pots for Elevator, Aileron and Throttle that are labeled "PB".
If push buttons are installed on the outside of the transmitter, they may be used for presets such as slow roll or engine kill.
Slow roll (for example). While holding down the Aileron push button, adjust the Aileron "PB" until you get your desired left or right aileron. Release the button and the aileron will return to neutral.
The "PB" feature is added or summed to the stick and trim positions. This means the "PB" feature is an off set and when the button is pushed, the stick will still have some affect on the servo.
You may set the "PB" to its mid or neutral position if you don't want to use this feature.

Some transmitters will have mixing features.
Example, mixing Aileron to Rudder where the Aileron stick will also give you Rudder but the Rudder stick will have no affect on the Ailerons.
If installed, there is a "mix" switch with a hole next to it to adjust a pot. If the switch is off, each channel works as normal. When the switch is on, the Aileron stick movement will also give you rudder movement. If the pot is all the way CW, the relationship is 1 to 1, half Aileron will also give you half Rudder. If the pot is in its mid position then half Aileron will give you 1/4 Rudder etc.
Note; On some set ups with the mix on, right Aileron (for example) might give you left Rudder. In this case, you need to use the Rudder servo reversing and then install the Rudder push rod on the other side of the Rudder servo for normal Rudder operation.

Some transmitters will have two switches, one on either side of the antenna for elevator and aileron Expo.

When the switch is in one position; there is a linear response between the transmitters joystick and the servo - half stick gives you half servo deflection.
When the switch is in the other position; servo response is reduced around neutral but overall servo travel is the same, this means the servo moves further at the extremes to catch up. The amount of Expo is determined by a pot close to the Expo switch, full clockwise will give you linear response (switch in either position is linear) and counterclockwise increases the amount of Expo.
Note; the amount of Expo "dialed in" will be the same for high or low rate.

There are 6 trim pots inside the transmitter - See picture above and note my labels 1-6
Pots labeled 1&2 are travel adjustments for Aux channels 5 & 6 as described above.

Pots labeled 3-6 should not be touched unless you have the test equipment and know what you are doing.

Pot 3 is the only single turn trim pot and is usually found close to mid position.

Pot 4 is master timing.
Adjust the volt meter on the front of the transmitter.

Replace the transmitters back noting top/bottom. The tabs are toward the bottom.

Replacing the batteries in a 1976 or later Signature Series transmitter.

Note, the back cover of the transmitter has cutouts or tabs. These tabs must be toward the bottom.

Servo adjustments are made under the name plate, except for Aux channels 5 & 6 which is inside.

The charge jack is also under the name plate on 1975 transmitters only. 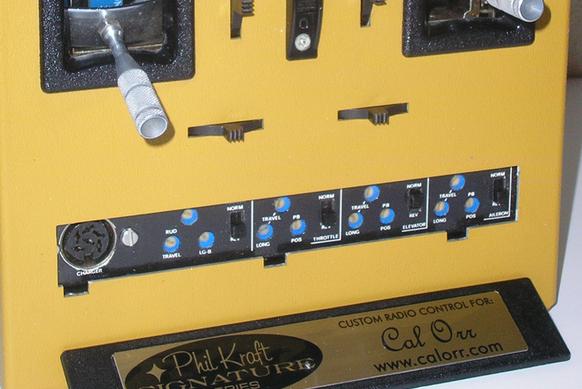 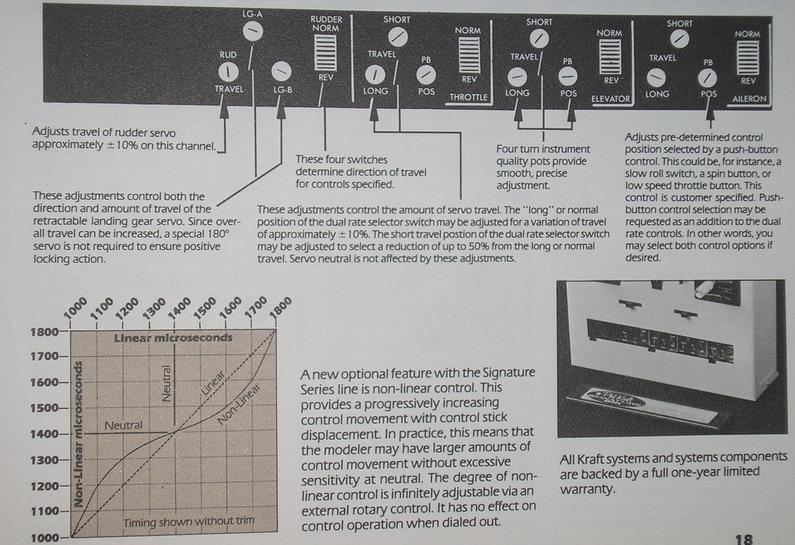 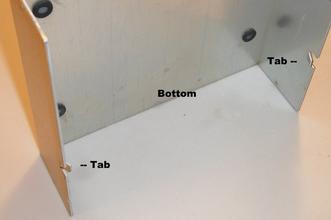 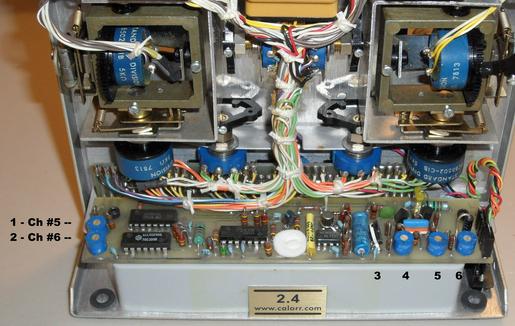