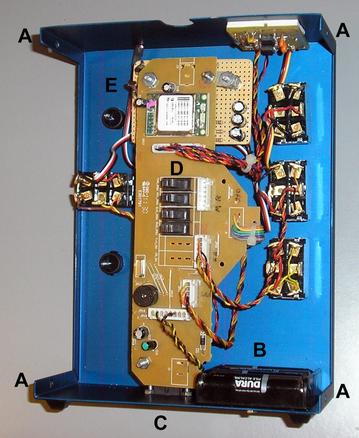 The Reed Emulator is shipped to you with a JR trainer cord and 4 AA batteries.

Note; The throttle on the Reed Emulator is very unique. If flying electric, remove propeller until

you understand the system!

Inside The Reed Emulator

"A" - 4 screws that hold the transmitter case together.

to be connected from the Reed Emulator to the master

transmitter. Or the Phoenix Pro Flight Simulator may plug

into this port. The Reed Emulator is powered up when a

cable is plugged into port "C"

then aileron, elevator and the bottom switch is for rudder.

Switches to the left is "Normal"

"E" - Toggle Switch for dual rates, up is high and down

is low rate for rudder, aileron and elevator.

To use the Reed Emulator with your Horizon Hobbies Phoenix Pro Flight Simulator.

To use the Reed Emulator with a JR/Spektrum transmitter and fly an airplane.

*Select an airplane that is a slow flyer, maybe high wing and 3 channel. If using 3 channels, the rudder servo should be plugged into the receivers aileron port.
*This airplane needs to be flown with a JR/Spektrum transmitter. The servo linkages need to be setup so the throws are  close to 100%. If using dual rates, normal flying should be done at high rates also close to 100%. Sub trims need to be "0".
*Test fly the airplane WITHOUT the Reed Emulator, be sure to check servo reversing and trims - trim it out!
*If this is an electric airplane - remove the propeller!
*Take a look at the instructions for the master transmitter you are using. Many transmitters require you to turn on the

Match the Reed Emulator to the Master Transmitter.

A Note About Throttle;

The Reed Emulator is designed so on power up (trainer cable plugged into port "C") its throttle position is low and you can walk up to high throttle from there.
But.... you don't really know where the throttle is!  When the master transmitter selects student (Reed Emulator) the throttle could jump to high - right now!
*When on the ground, always stand away from the propeller and tie down or hold on to the airplane.
*When on the ground, hold the Reed Emulator's throttle toggle switch in the low position for 2 seconds right before the master transmitter selects student (Reed Emulator).
*When in the air, both pilots need to be aware of the position of his throttle before switching back and forth.

Some Reed Emulators have a push button switch labeled "Key". This is to emulate flying of a single channel radio using an escapement - rubber band powered servo.

There is a switch in the middle of the Reed Emulator that is labeled "Power". This switch is used to select between Reed and Escapement.
Power switch down is for Reed Emulation
Power switch up is for Escapement Emulation.
The "Power" switch does not turn the Emulator on/off, the Reed Emulator is powered up when the trainer cable is plugged into port "C" at the bottom.
The model selected for this feature should be a slow filer, high wing and 3 channel (rudder, elevator and throttle). Keep in mind, in the day, RC models were guided free flight airplanes.

Do not use a 4 channel airplane and connect the ailerons to the escapement channel.

Push and hold for right......Release for neutral.

Push and hold for left.......Release for neutral. etc.

And... at any time the master transmitter can take over with normal proportional control of the model.

Note: Single channel radios of the day only operated the rudder, you had no remote control of the elevator or throttle. The Reed Emulator will allow you to still use the elevator and throttle and their trims while using the Key or escapement feature.

The use of an arming plug should be used for electric flight.

Unplug trainer cable from the Reed Emulator's port "C" after use to turn it off.