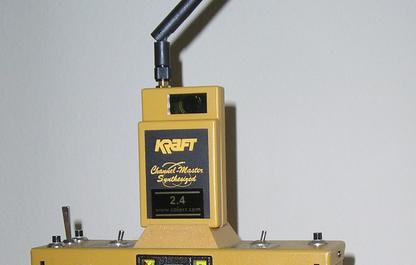 The Kraft 2.4 transmitter module is housed in a Kraft Channel Master case.
Inside the Channel Master case is the 2.4 module itself, the interface electronics, 2.4 antenna, LED and bind button. No modifications need to be made to the transmitter itself.
However; I do recommend that you swap channels 1 & 3 (elevator, throttle) on your transmitter. Throttle should be channel #1 which allows you to take advantage of JR's fail safe.
Note; many ESC's have a fail safe built into them - low throttle in the event of a problem. These ESC's will not recognize a hold as that is also a good set of servo pulses.
You may still plug in 72 or Ham modules into your transmitter. In these airplanes you will have to swap the elevator and throttle servos at the receiver.
When using the Kraft 2.4 Tx module in your 7C or Signature Series transmitter, you will note that the RF meter on the transmitter is indicating some value. The meter will operate but it does not indicate anything except there is power to the module. The RF meter may have different readings depending on battery voltage etc. As long as the RF needle moved, aprox mid scale or so -  its ok.
The battery voltage meter on the transmitter has not been changed and will work as always. This meter should be between 9.6 and 11.4 volts for flight.
.
Do Not:
Do not use Li batteries or batteries that are higher than 11.4 volts for the transmitter or 2.4 module.
Do not use the Kraft “Buddy Box” feature with the 2.4 module installed.
Do not use the 2.4 module without its 2.4 antenna.
Do not use this circuit with a 5C or 3C transmitter.

Your Kraft 2.4 Tx module output is DSM2 or DSMX and will only operate with JR/Spektrum receivers either DSM2 or DSMX.
JR (JR only not Spektrum) also has a new mode, DMSS and your Tx module will not operate these receivers.

*The telescoping metal antenna should be removed from the Kraft transmitter OR at least collapsed inside the case. An extended metal antenna close to the 2.4 antenna will kill your range.
*With the Kraft Tx off, plug in the 2.4 module.
*You need to adjust the 2.4 antenna so it does not point at the model when flying.
*Power on - in a couple of seconds the module will "beep" and the LED may flash.
(The LED is seen through the film window where the dials for 72 MHz frequency selection were.)

The bind button on the back of the TX module has three functions.
#1 - If pushed and held when the transmitter is on, the RF output is significantly reduced. Use this feature as a range test. You need to get 30 paces (90') from your model. When the button is released the RF output is restored.
#2 - If pushed three times fast when the transmitter is on, the module will step to the next mode of operation. If the output was DSM2 11ms (for example), the mode will change to DSMX 22ms etc.
(DO NOT PLAY WITH THIS BUTTON DURING FLIGHT.)
#3 - Used to bind Tx to Rx.

Bind - Tx to Rx
#1 - Plug bind jumper into bind port of Rx.
#2 - Power on Rx, LED(s) in Rx (and satellite receivers) will flash fast.
#3 - Set sticks (and switches) on Tx to desired fail safe. Neutral and LOW Throttle, trims too.
#4 - Push and hold bind button on the back of the Tx module and then turn on Tx. Note, your Tx should NOT be right on top of the receiver. Move away a few feet.
#5 - In a few seconds the flashing LED in the Rx (and satellite receivers) will be solid and everything will operate. Release bind button.
#6 - Turn Rx and Tx off.
#7 - Unplug bind plug from Rx.
Note:
The bind process usually selects the mode of operation in the Tx module for that receiver. If not, you may have to step through the different modes of operation for your receiver.

Note; if you are flying more than one airplane with your Kraft transmitter, you may bind all your airplanes (receivers) at one time. This means you will not have to rebind when you fly another airplane - just check servo reversing.  For this to work, all the receivers must be the same mode - either DSM2 or DSMX, either 11ms or 22ms frame rate.

Turn on Tx  first, it should beep then the LED will flash (unless DSM2 22ms was selected) indicating mode of operation

Turn on Rx, it will link in a few seconds with its LED(s) on solid.